We use cookies to give you the best experience. By using this site you agree to our Privacy Policy. If you don't consent, you can opt-out by closing your browser tab or navigating to a different site.

Ok, I'll admit it. I'm a lefty tree hugger. I like trees, so what? More people should like trees. Trees are awesome. But I'm also a tradie, have 26 years experience in the building industry, and drive a 4x4, so I'm not what people consider a typical 'greenie'. I work hard, run a business and sit on the board of two organisations. I get my hands dirty, I can swing a hammer and a paint brush, and I have a mortgage.

I'm also really, really concerned about climate change. I believe the tens of thousands of climate scientists who say that to avoid environmental and societal collapse we must take drastic action to curb emissions, the same as I believe my doctor when he tells me to eat heathier and get more exercise. It's just plain science, based on research and factual data.

Earlier this year I found out I was going to be a Dad, and at the time I wasn't too concerned, because I thought the tide was turning, and people would vote for action on climate change. I thought my child would be born in a world where the majority of Australians cared as much as I do about the environment and the great outdoors, and we would be able to start taking meaningful action in Australia to cut emissions. It turns out I was wrong. People voted for a government that promised to do nothing about climate change, but did promise tax cuts. How could people believe that franking credits were more important than our very existence on this planet? Why would someone think coal mines owned by Indian billionaires were more important than our magnificent Great Barrier Reef?

To say that I was disappointed is an understatement. My daughter would be born in only a few months, and I was struggling to think positively about her future.

So, what is going on? I'm a member of several social media groups, and I noticed that lots of my friends supported action on climate change. In particular my friends and colleagues who are architects and designers all strongly support governmental action on climate change. However, most of my tradie mates had voted conservatively, and not for any parties that had serious policies on tackling climate change. The messaging on tradie forums was very anti-climate change action, and anyone who voiced concerns about environmental issues was trolled, told they were a hypocrite, and became the butt of jokes. The opinion among many people in the building industry was that the push from climate change action was coming from 'latte-sipping inner city elites who have no idea about the real world' and that these people have 'probably never worked a day in their life'.

Now, most of my tradie mates are not stupid people. They also love the great outdoors, they have families they care deeply about, and many of them are very well read, and people I respect. Some of them had even taken steps to make their businesses more sustainable; cutting waste and switching to more sustainable products. So I started sharing information with them about climate science, in the hope that it might change their minds. Some of them live in regional areas who are already suffering from Australia's worst drought in recorded history, and in areas experiencing dramatically higher risks of catastrophic bushfires. Surely they would recognise that climate change was impacting their lives right now?

I attended and supported the Climate Strike in September, and ended up getting interviewed by The Age newspaper, probably because I was one of the few people who looked like a tradie. There were hundreds of thousands of people protesting, including union representation, but it was disappointing to see a low turnout from CFMEU members. I copped a huge backlash from other tradies for taking a stand. As I marched down Collins St with the tens of thousands of protesters, I stopped and spoke to other tradies along the way. 'What good does marching do?' said one. "Are we all going to stop driving our utes? I can't see that happening."

My debates on social media became quite heated; tradies don't hold back; we call a spade a spade, and I could feel myself becoming more and more angry and frustrated with the seeming inability of my industry to recognise inescapable facts. So much so that I ended up deleting social media apps from my phone in an attempt to regain my balance.

This has given me opportunity to reflect on why the debate is so polarised. Nowhere is this more obvious than in the building and construction industry. Talk to most designers and architects and they will tell you that they would love to spend more time designing more sustainable buildings. They are disappointed that too often their designs are altered by builders and tradies who don't understand the sustainability concepts embedded. Why is there such a disconnect between the designers in our industry, and the builders and tradies who actually build their designs?

After months thinking about it in the shower, (that's where I do a lot of my thinking), it suddenly dawned on me that the problem is fundamentally about how people learn. It goes right to the heart of education and how people see themselves.

It really boils down to this fundamental fact; tradies like to see themselves as practical people. They like to see, touch and try something before they understand it. They like solving practical problems, not theoretical ones. Ask a tradie to solve a problem in a book, and he will run the other way and call you an 'elite'; show him a problem face-to-face and ask for a practical solution, and he will spend all day trying to fix it.

This, I believe, is where all sides of government are failing. They are failing to demonstrate the practical solutions to the climate change crisis. The solutions are there. We have the technology to enable large scale change in our economy; we know what the solutions are. It's time to show people what can be done. It's time to help tradies see the tremendous opportunities that action on climate change brings to them, and how they can get involved in supporting it.

When the current leader of the government claimed that electric cars would 'destroy the weekend' we should have demonstrated the incredible new 4X4 electric utes that are coming onto the market; they are faster, more powerful and sexier than any of the thirsty, stinky diesels favored by tradies today, and they cost almost nothing to run because they have very low fuel and maintenance costs. 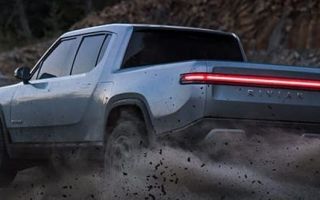 Above: The new Rivian electric ute is faster and more powerful than most conventional utes

When the tradies in regional towns in Queensland said they were worried about finding jobs, we should have invited them to tour the new battery and wind-turbine factories in Geelong, or the new solar farms and wind farms getting built in Queensland.

When tradies say they are worried about job security under a government that takes action on climate change, we should demonstrate how improving the energy efficiency of our houses and buildings will involve billions of dollars in investment in retro-fitting Australia's building stock, and new practical skills.

When tradies complain about the cost of living, we should show them how switching to renewable energy cuts energy bills, even if you don't own your own roof.

Show people how they can get involved; how supporting action on climate change will deliver a better economic and environmental future for themselves and their families. Tradies love solving problems; they are an untapped resource in the fight against climate change, both at the ballot box and in our communities.

Author: Daniel Wurm is a qualified trades person and teaches sustainability to builders and trades people across Australia as part of the Green Building Institute's Green Tradies and Energy Smart Builders Program.